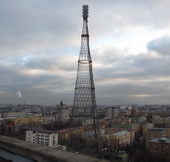 Radio tower at Shabоlovka is a symbol of Soviet radio and television broadcasting, a worldwide known monument of architecture which belongs to the Russian avant-garde. Nowadays it’s more often called “the Shukhovskaya Tower” following the name of its creator Vladimir Grigoryevich Shukhov (1853-1939), an outstanding Russian engineer, corresponding member and honored member of the USSR Academy of Sciences. The tower was constructed in 1919-1922, radio broadcasting commenced in May 19, 1922. During 1937-1967 the tower was also used for television broadcasting.

Not once in 90 years the tower was subjected to a capital repair. The Shukhov’s bearing structure (six hyperboloidal sections) actually preserved in its original form. During various years a number of additional elements was installed on it: process platforms at various levels and a girder for connection of feeders (1937), intermediate rigidity rings

Corrosion of tower steel structures reached a warning level already in 1991, but only in 2011 the state funds were allocated for its renewal. There are several projects of tower restoration. At present the state review of design documentation is in progress which is prepared by “Kachestvo i Nadezhnost Ltd.” in 2011. It implies that the tower will be brought to its original appearance of 1922. In particular, according to this design it is planned to remove and settle on the ground for restoration two upper hyperboloidal sections of the tower, and then to re-erect them.

Due to large scale restoration works planned for 2012 and in connection with the 90th anniversary of the tower in 2012, as well as the 160th anniversary of V.G. Shukhov in 2013, at the end of 2011 the S. I. Vavilov Institute for the History of Science and Technology of the Russian Academy of Sciences (IHST RAS) took a decision to create an exact digital 3D model of the tower. The purpose of this project is to preserve exact and detailed information about the Shukhov`s structure prior to its dismantling and reconstruction and to provide an access of wide public to this data. The project has been executed by the Center for Virtual History of Science and Technology of IHST RAS with a support from the company Trimetari LLC, St. Petersburg.

The basic and detailed design documentation practically does not exist, only four unrelated drawings are available in the Archive of the RAS and RGANDT. In 1947 a detailed measurement of the tower structure was performed. In the explanatory note it is stated: “Technical documentation (basic design, working drawings and calculations) for the tower has not survived. In 1937, in order to install an antenna for the television center and connection of a feeder, a metal double-walled girder was erected along the tower height up to the mast, and three platforms were constructed (at the elevations 141.768; 144.3 и 148.378 m). Working drawings are available for all the steel structures erected during the reconstruction”. However, already in 1971 the documentation of 1937 was considered lost: “In

1937 the complex of enterprises Radiostroy performed a reconstruction of the tower: a metal double-walled girder was erected, and three platforms were constructed (at the elevations 141.768; 144.3 и 148.378 m). Technical documentation for tower construction and reconstruction has not survived”.

In 1991 a design of the superstructure for fastening of VHF-FM antennas was prepared. The general scheme of the tower included in that design repeats the scheme of 1947. In particular, it does not show the additional intermediate rigidity rings erected in 1973, process platforms at the elevations 50, 75, 100, 125 m, etc.

Thus, general information about the tower geometry available in the accessible documentation are based on the measurement of 1947 and do not represent the current status of the facility. Due to the above the results of a tridimensional laser scanning of the tower performed by us at the end of 2011 have become the main source of data for the creation of a 3D model. The documentation of 1947 is used as an auxiliary material.

In December 2011 we performed a tridimensional laser scanning of the tower using Leica ScanStation 2 and FARO Focus3D laser scanners. Field works took 3 days, seven scanner stations were established (three on the ground 5-10 m far from the tower, one on the ground in the middle of the tower, and three – on the process platforms located at various tower elevations – 100, 125 и 141 m). The accuracy of scan inter-alignment was 7 mm, the final model contains about 100 mln points. The model was coordinated with the datum points at the base of the tower and to the stations of the Moscow geodetic control grid.

At present preparation of the tower 3D model is complete based on the results of laser scanning and available documentation.

The following method is used to incorporate tridimensional models in the cloud of points. A part of points which corresponds to an individual element (for instance, a channel bar) is extracted from the cloud of points. Three edges of the elements are determined, and a center line is drawn. Cross layers 1 cm thick are built every 2-3 m perpendicularly to it. Based on the points occurred in the cross layer a foregone cross-section of the element (for instance cross-section of the channel bar No. 14) is set manually. Thus a set of 10-12 sections is obtained

based on which a profile is “squeeze out”. This method allows modeling of twisting and bending of metal structures. The average accuracy of “incorporation” of a tridimensional model into a cloud of points which achieved using this method is 4-8 mm.

According to the preliminary assessment the average accuracy of the tower 3D model is about 1 cm in the integrated system of coordinates.

Laser scanning of the tower performed in the course of works allowed fixing the general geometry of the structure with a high accuracy and spatial resolution.

The obtained cloud of points is the most complete primary 3D documentation of the tower geometry. Apparently, tower 3D model which is being developed as a result of the project will become the most accurate and detailed of all the existing models.

A digital model created as a result of the project based on 3D scanning significantly simplifies the access to the data on the tower structure and allows involving a wide range of researchers, including foreign ones, to the historical and technical analysis. In particular, it gives an opportunity to separate all the elements of the tower not included in the available archive documentation and, thus, to put a number of questions for further historical research.

Creation of 3D models of outstanding architectural monuments, pieces of art and technical models is a world-wide trend. Virtual Heritage technologies presented in this article using the case study of the 3D model of the Shukhovskaya Tower allow preserving the information about unique facilities for future generations and give an invaluable input in the popularization of science and technology.