The total number of the scanned tunnels is 11, all of them are located near Sochi, Russia. The aim of work is filling the electronic database by objective spatial data on the actual condition of tunnel structures at the federal roads.

It took one week to capture a point cloud, painted in realistic colors, obtained with a built-in camera.For this period the tunnels entries, portals, breastwalls, planimetry had been surveyed. The weather conditions, especially in the mountainous part of the job site, were not  favorable for geodetic works: the temperature was from +2 to + 8º C, the wind speed up to 6 m/s, frequent precipitation in the form of rain or snow. Under such conditions, Mobiskan “Stop & Go” mobile laboratory of laser scanning facilitates and speeds up the work greatly. Georeferencing of scans was performed by a resection method. This method requires special targets to be placed on the object before laser scanning. The accuracy of registration of scans was 3 mm (mean absolute error).

The office processing of data was started a few days after the beginning of the field stage, without waiting for the final measurements to be ready. The field team sent the data to the office perodically by the Internet. The office survey took 2.5 weeks, so the total period of work amounted to 3 weeks. It is only a 3D laser scanning technology that allows to achieve such rapid results. 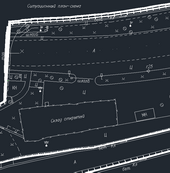 – The cross profile of the road at the entrance to the tunnel,

– The cross profile of the road at a given location,

– The longitudinal profile of the roadway along the axis of the road,

– The longitudinal profile along the retaining wall of the portal.

Herewith the location, the linear dimensions of the portals, the retaining walls, the fences and the road infrastructure were determined. Three-dimensional models of the tunnels entries were performed in addition to the set of 2D documentation. Accurate 3D models, built according to the 3D laser scanning data, incapsulate all spatial information similarly to that in flat drawings. 3D models are perceived visually at a qualitatively different level, which is essential for making planning decisions, design and assessment of the situation.

The resulting measurement documentation will support planning of maintenance and repair of transport infrastructure. In addition, the relevance and objectivity of the obtained passports of transport facilities will inevitably lead to more efficient management of mountain road tunnel junctions on the federal highway network.

The Federal Road Agency (Rosavtodor) is a federal executive authority, which provides public services and administers the state vehicles and roads property, including recording of motorways, and provides state services related to transport safety in this area.